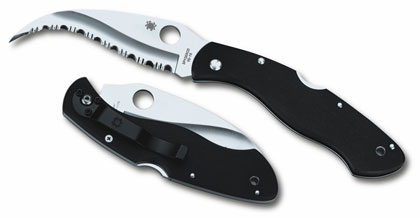 Like firearms, not all knives are created equally. Just as the 1911, the Browning High-Power, the Uzi, and the Thompson transcended their roles as weapons to become historical icons, the Fairbairn-Sykes dagger, the KA-BAR, and the Gerber Mark II made indelible marks on the history of edged weapons. In the same spirit, one of the most distinctive and recognizable folding knives ever produced is the Spyderco Civilian.

In 1981, Spyderco’s founder, Sal Glesser, single handedly revolutionized the knife industry by defining the modern folding knife. First, he gave it the capability to be deployed quickly and positively with only one hand via his Trademark Round Hole in the blade. To ensure immediate access and make its deployment even quicker, he added a spring clip that keeps the knife poised at the top of the pocket. And finally he supercharged the cutting power of the humble pocketknife by adding scientifically designed serrations to the cutting edge.

Although commonplace now, these features set Spyderco knives well apart from the competition in the early 1980s. They also made them the tools of choice of savvy law enforcement personnel who appreciated them as both reliable tools and potent back-up weapons in officer survival situations. As a direct result of this dedicated law enforcement following, in the late 1980s, Spyderco was approached by agents of a U.S. federal law enforcement agency with a request to produce a special-purpose folding knife. These agents regularly engaged in undercover narcotics operations that made the carry of a traditional sidearm or even a backup pistol impossible. To give themselves a fighting chance if a drug buy went south, they wanted a folding knife that could be easily carried and concealed, but had the capacity to inflict massive damage with simple, gross-motor-skill tactics. They were not trained knife fighters, so they wanted a knife that would transform instinctive offensive and defensive actions into devastating fight-stopping tactics.

This entry was posted in Uncategorized. Bookmark the permalink.